Jennifer picked Caden up from daycare last week and heard this story. Caden and his classmates were eating gram crackers and apple sauce, which Caden loves so much he usually asks for seconds.Â  He wasn’t finished with his first helping when he heard the teacher ask another child that was finished if he wanted to go outside.Â  Caden instantly stopped eatingÂ  and said, “All Done! Done! Outside! Outside! 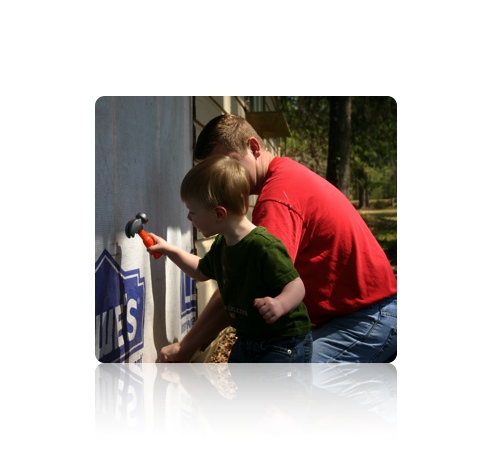 Bonus Story:Â  In a related story, Caden was sick on Monday stayed home.Â  After he was dressed for the day and before Jennifer left, he brought us his socks to put on.Â  We put them on him.Â  He then disappeared and returned with his shoes (matching shoes at that) and wanted to put them on also.Â  Jennifer and I suspect that he was trying to give us a clue that he wanted to go outside, although we might be wrong, ha!?

Part III, the final installment of our Disney Trip:

We believe Caden enjoyed this park more than any of the others.Â  We think this because we heard him talk the most in this park while just wheeling him around in the stroller. Kilimanjaro Safaris, by far is the most fun, riding through the reserve seeing the animals.Â  Our ride was delayed because there were animals in the path of some of the vehicles in front of us. 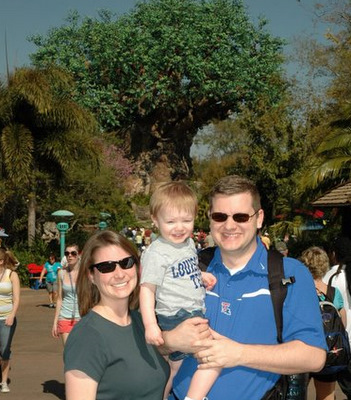 We took our first photo with a character at Animal Kingdom, with none-other than Stich, probably one of the scarier looking characters.Â  Caden’s reaction… he wanted to touch his nose. 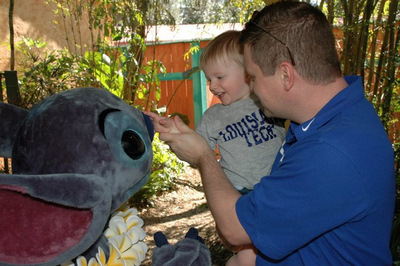 There were a number of Jungle Treks, where we just walked through and looked at birds, hippo’s tigers, etc.Â  We also took the Wildlife Express Train to the petting zoo, which Caden really liked.Â  We got Fast Passes to Everest but after a long wait in a food line, then lunch, we decided to go back to the resort to give Caden a little down time before we met friends,Â  Scott, Shelly, and Jackson Bokash (who live in Orlando) at Downtown Disney at T-Rex for supper 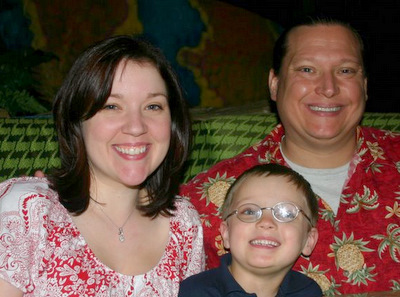 Our mistake with Downtown Disney was not bringing a stroller. Â  Caden got a little heavy to carry around, so we didn’t do a lot of shopping.Â  We had also been to Downtown Disney a couple of nights earlier with mom. We ate at the Rain Forest Cafe that night. On the bus ride back to the resort that night, Jennifer and Caden sat next to a couple who’s little girl was not happy about something and we could tell.Â  Caden started giggling some time during the trip to the resort, the full belly giggle that just makes you want to laugh, or at least smile, come on, you know you just cracked a smile?Â  Anyway, by the time we got back to the resort, the little girl had swapped places with her dad so she could be next to Caden and “experience” him first hand, and she was in a good mood when we arrived at Pop Century.

We got to Epcot a little late the one day we went to the park.Â  We still did a lot, though!Â  In Living with the Land we took a boat tourÂ  and saw some of the cutting-edge technology they are using to grow food.Â  This tour is one of my favorites!Â  It makes me want to go home and work in my green house and yard more than I currently do (which is not enough).

Imagination with Figment, Caden really loved this attraction, not the ride as much as the activities to do at the end of the ride.Â  Below he is walking over squares that light up and make noise when they are stepped on.Â  He ran around for a while in this area. 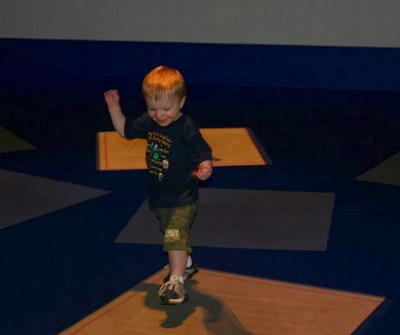 The Seas with Nemo and Friends, was a new attraction that we had not been on before. Caden took a power nap while we were in line and through the ride the first time.Â  The second time he rode it, we heard him say “fish” a lot.Â  It is a really neat ride.Â  We also tried the Turtle Talk with Crush, which is an interactive show, but he was too tired to sit still, so we bailed. We, wisely sat close to the doors so we could do just that in case of a possible meltdown.

Spaceship Earth had also been renovated since the last time Jennifer and I were there and it was pretty neat too.Â  I think Caden enjoyed it also because it moved slow and there was lots to look at through the ride.

Our only regret at Epcot is that we didn’t get to ride Soarin’ which is one of the most amazing, beautiful, relaxing rides that I’ve ever ridden.Â  A lady from Brooklyn we were talking to one day on the bus, put it best when she said, “If I wasn’t religious, that ride would have been a religious experience!”Â  We agree.Â  You see, smell, and even “feel”Â  California from a hang glider.Â  It by no way, is a thrill ride.Â  The music is beautiful as well as the scenery. Caden would not have been able to go on the ride, and since the Fast Pass machine was already empty for the day we decided to skip it.Â  Next trip, for sure!

Other Tips We Learned:

On past trips we usually would carry a bag with us into the parks, with water, medicine, raincoats, snacks, etc.Â  In truth, it was a diaper bag, but we would never admit that until we had kids.Â  A couple of trips back, we went with Trey and Stephanie Greer and the bag affectionately became known as “The Magic Bag.”

This trip, we decided to retire the “magic bag” and to use a really nice backpack we had received for free a while back.Â  It is a Kelty backpack, and I highly recommend them.Â  If not it, a very comfortable backpack.Â  This one has so many straps, that the day we had it loaded down with everything, it was very comfortable to bring with us.

Strollers — The weirdest question I was asked when I rented the stroller for the week was if I wanted to buy it, which would have been cheaper. The question confused me so much so, that I didn’t ask any more questions and we just rented.Â  I wish I had asked more on how did that work? Do I get to use it next time I’m there? Surely I don’t take the stroller with me?Â  I’ll admit, this was the first day we had gotten to the park and we couldn’t get to the attractions fast enough!

I do wish we had brought a stroller for the resort and Downtown Disney.Â  We know for next time!

Photos that we took are here! (just in case you missed them in the last blog, the Photo Pass photos are here.)

Jennifer and I celebrated our 9th Anniversary this past week.Â  It has flown by, but also seems like a lot longer. We know each other so well. Many times when one of us says something, the other one just starts laughing… the reply is always the same, “That is what I was thinking.”

Since Wednesday (3/11) was our Anniversary, we just went to lunch together (Blue Light), take-out for supper (WOW), and then a movie on Friday (Race to Witch Mountain!).

We did just get back from Disney World, so we didn’t get each other real expensive gifts. Jennifer got me a new binder for my recipes (in case you didn’t know, I love to cook).

The old binder was falling apart.Â  She also got me a Dharma T-shirt (from the Lost TV show). She humors me so well, since she doesn’t watch the show! 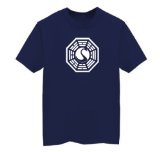 I saw this a number of years ago, but recently just thought about it again, it is a short film (8 minutes or so), called “George Lucas in Love.”Â  It is a parody of Shakespeare in Love.Â  I think it is pretty clever.Â  Enjoy!

Caden really liked Pirates of the Caribbean, it was one of the slower rides that allowed him to take every thing in as we went through the ride.Â  We rode it three times with him.Â  Of course, we rode, It’s a Small World, Peter Pan (while waiting in line,Â  we saw Tom Cruise and family pass by on the ride), Pooh, Snow White, the Train, and the Haunted Mansion.

Buzz Lightyear (not the new one at Disney Studios, but the one in Magic Kingdom) was also a favorite of Caden’s — probable because it is interactive and we get to shoot things.Â  His dad loved that and beat him and his mom’s score on the ride.Â  He also loved the Carousel and Aladdin (much like the Dumbo ride).

My mom flew in and spend February 14th with us, which was also her 65th Birthday. Yes, she got in FREE. 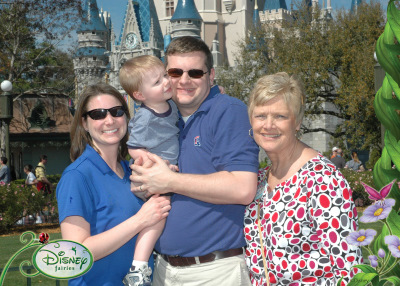 Mom actually flew in on the 13th, so we ate at Downtown Disney to celebrate my birthday (which was the 11th, no I did not get in Free, we didn’t arrive at WDW until the 12th).Â Â  Mom left on the 15th, in the afternoon.

On the 14th, we arrived with mom at Magic Kingdom a little before 10 a.m.Â  This was the day we rode Aladdin for the first time and we didn’t think Caden liked it during the ride because he hung on to Jennifer tight the entire time. When the ride was finished, he let go and started baby signing and saying “more, more, more!” 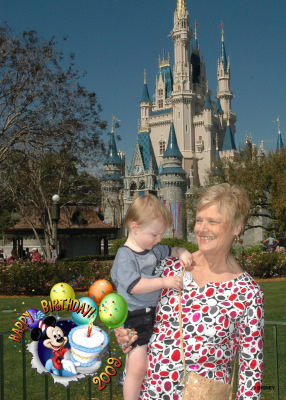 After Aladdin, we sat down and cooled off in the Tiki Room, where he passed out and slept for about 15 to 20 minutes.Â Â  It was the middle of the afternoon.Â  When we left the Tiki Room, we were able to sit outside in the shade and rest and let him take a power nap.

We also rode the Transit Authority (what we call the “people mover”) that goes through Space Mountain as well as around Tomorrowland.Â  About 4:30,Â  we finished up at Magic Kingdom and took mom to the Contemporary to do a little shopping and surprise her with Chef Mickey for supper!Â  I would recommend any of the Character DinningÂ  after our experience at this one place.Â  It was a wonderful way to end the day, mom’s birthday, and take lots of photos with the characters.

After supper, we went back to the hotel and mom hung out with Caden and Jennifer and I went back to Magic Kingdom to have some “Big Kid Time” and ride the “Big Kid Rides.”

I’ll end this post here, as you can see, we spent most of our time at Magic Kingdom, it had the most for Caden to do. We did go to Epcot and Animal Kingdom, but skipped Disney Studios.Â  Part III coming soon!