My father passed away on Sunday, October 6, 2013 around 3:15 am.  By the end of the day, we were in Pineville at the Country Inn and Suites, so we could start making preparations for the funeral on Monday.

Jennifer and I read a devotional with Caden each night, The One Year Devotions for Preschoolers.  Despite it being such a long day, I sat down to read October 6’s before bed and here is what I started reading… (click on the picture to make it larger): 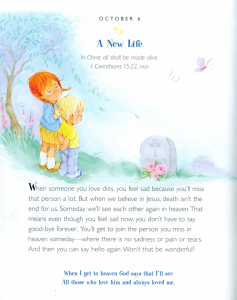 Richard Luel “Dick” Breeding, 72, of Pineville, Louisiana passed away peacefully on October 6, 2013 in Ruston, Louisiana, as he succumbed to Parkinson’s Disease. He was surrounded in love by his three children.

Preceding him in death were his father, Luel “LL” Breeding, his mother, Mildred Chapman Breeding and a brother, Michael Breeding.

A special thank you to Ruston Nursing and Rehabilitation Center and Hospice of Caring Hearts of Ruston for their loving care and support.

Memorial donations may be made to the Hospice of Caring Hearts of Ruston, 100 S Trenton St, Ruston, LA 71270. – See more at: http://www.legacy.com/obituaries/thetowntalk/obituary.aspx?n=richard-luel-breeding-dick&pid=167418559&fhid=12059#sthash.8qaD2XHf.dpuf