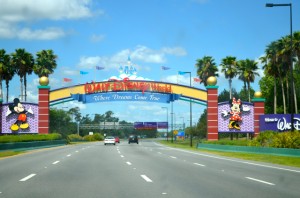 By 9 am on Monday, we were headed to Walt Disney World where we spend 5 full days, enjoying Magic Kingdom, Epcot, Animal Kingdom, Typhoon Lagoon, Hollywood Studios and Bay Lake Tower at Disney’s Contemporary Resort’s, which was our nice home durning our stay.

Once we were checked in, we grabbed lunch at the Contemporary’s Contempo Café which is their “Quick Service” restaurant.  It isn’t a normal “quick service experience, from ordering on touch-screen kiosks, to the actual menu items. 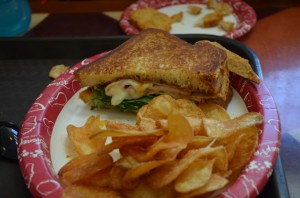 Jennifer and I split a hot turkey sandwich that was topped with Brie, apple butter, apples (tasted like Granny Smith),  and arugula on Challah bread with home made potato chips.  We had another one later in the week it was so good!

Once at Magic Kingdom, it was time for Caleb to get his first haircut. He did really well, despite the “what do you think you are going to do with those” looks he gave the lady throughout the haircut. 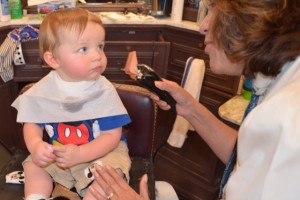 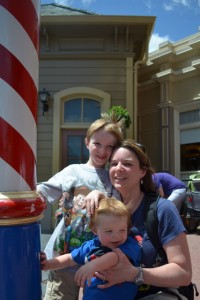 After the parade, we road the train to FantasyLand (which is still under expansion construction, but Dumbo was now open. We road it and then Caden and I rode his first roller coaster, The Barnstormer (Goofy’s Roller coaster).  Jennifer and Caleb headed to get Fastpasses for Space Mountain.  Caden LOVED the roller coaster, and Jennifer returned with FastPasses for 8:40 pm.  We were planning to be back at the room by then, but we figured we would keep them and see what happened.

We ate at Liberty Tavern for supper and if you have never eaten there, just do it.  Supper is family style, no menu to order from, we had roasted turkey, carved beef, mashed potatoes, green beans, to name just a few items. It was really good.

Other rides we rode at Magic Kingdom (on Monday and on Friday evening) included: Snow White (for the last time, it will be replaced ins 2014 with the “Seven Dwarf Mining Train,”  Winnie the Pooh (we had a Fastpass for this ride, but Caden wanted to stand in line after seeing the interactive line (we didn’t though), It’s a Small World (twice) and Peter Pan (only once we tried to ride it a second time, but it was too late and the line was too long. It is our favorite of the “kiddie” rides).

On Monday night, Caden did indeed ride Space Mountain… TWICE!  I rode with him the first time, he rode in the seat in front of me and when we took off, he uncontrollably giggled, then laughed, then screamed with laughter. These three reactions continued through the entire ride!  When we got off, he started skipping (at 8:45 at night) and said, “Daddy I want to ride it again!”  So he did, with Jennifer.

After Space Mountain we headed to the room. The fireworks were going on as we left the park, so we stood outside the park for a few minutes and watched them before walking back to Bay Lake Tower.

Here are a few photos from taken from our window and balcony: 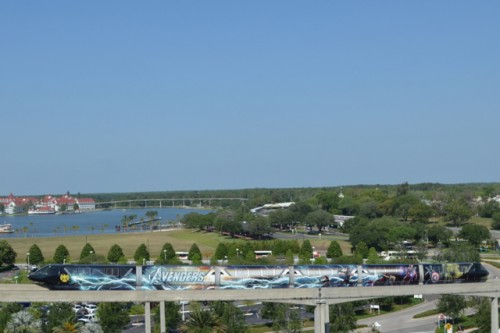 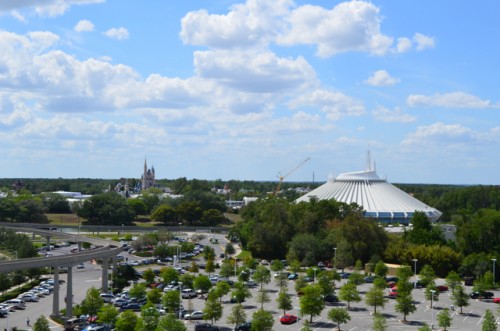 From our balcony we could see the Castle and Space Mountain, along with the fireworks every night.

A day and a half after we had left, we pulled up in the swagger wagon to mom’s in Stuart, FL. Mom had lunch waiting for us, which included garlic knots from Luna’s 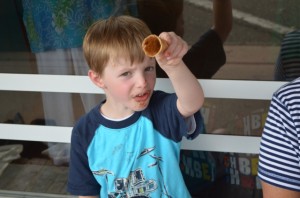 After a short nap, a trip to Downtown Stuart and a stop at Kilwin’s Chocolate Fudge shop for homemade chocolate ice cream.  After a short walk out on a dock and further down on the board walk we found a small playground where Caden and Caleb had lots of fun.

Once back at mom’s swimming in the pool and then to bed, because the next day we 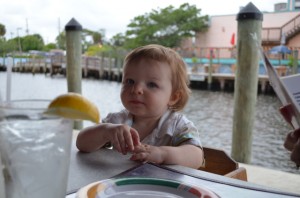 After afternoon naps, we went to Shrimpers for supper and sat right by the water.

A few photos from this much of the trip:

So no updates since Christmas, as you might imagine, that would because two little boys keep us really busy, but not too busy to go on vacation… and where else to go except DisneyWorld, by way of visiting mom, who now lives in Stuart, FL (which is actually a couple hours South of DisneyWorld. 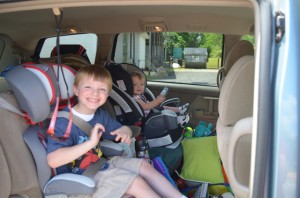 So on Friday, April 27 with two kids and two kids at heart, together for their first family vacation we were on our way.  We were up at 4 a.m. and had the boys up by 5 a.m. and on our way by 5:45 to Ocala, FL (our first stop). We stopped in Vicksburg, MS and ate breakfast at McDonalds. Shortly after sitting down to eat, a busload of kids showed up. Little did we know, this was going to be the theme of the day. 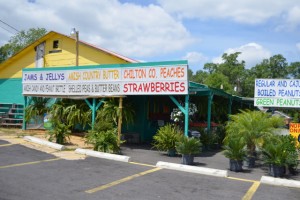 After getting back into the van, we decided to see how close a Chik-fil-a was, so Jennifer looked it up on her iPhone. We were using my iPhone for navigation. If one iPhone with TomTom is good, doesn’t that make two better? Right? 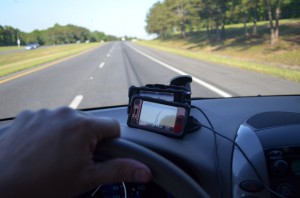 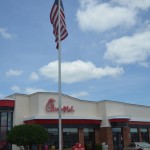 TomTom sent us through a golf course, that was having a golf tournament, but eventually got us to a Chik-fil-a, about 12:10 PM. The place was packed, but to my surprise, an employee came over and ask me if the empty table behind me was fine for us to sit out? I was holding Caleb (14 months old). I said, “sure, but I haven’t ordered yet.” She replied, “I know, I’m going to take care of you, I take care of my customers with small babies. And she did, we sat down, she took our order and we were eating without standing in a really long line.

Part of the long lines was because of a busload of kids that was there.

We made various stops durning the rest of the day, to get gas, snacks, and supper and made it to Ocala a little later than planned. I will add, we stopped at a FastTrack gas station that had a Wendy’s, Dairy Queen and a Subway in Madison, FL (Exit 258 on I-10). Shortly after sitting down to eat, up rolled a bus load of kids.

We arrived at the Hampton in Ocala about 10:40 p.m. (9:40 p.m. before the time change), but it still was a long day. Both boys traveled really well, and we would have made a little better time without our Chic-fil-a detour, since it took us about 30 to 40 minutes to get back on course.  Ocala was having BikeFeast so the hotel was full of bikers, and everyone we met was really nice.